My first exposure to radio as a hobby was in the Cub Scouts. There was a merit badge for  radio in the Wolf Cub Scout Book. 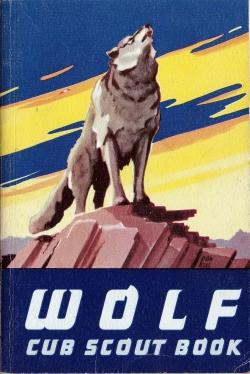 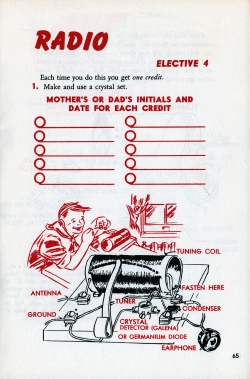 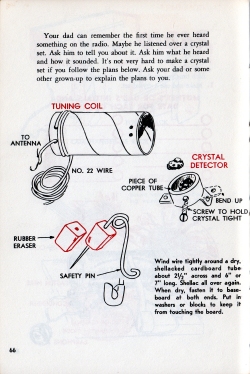 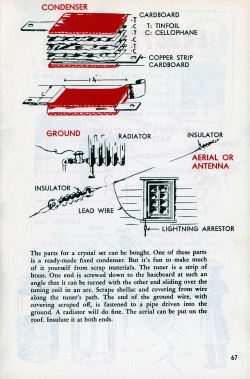 I soon found myself in the library at my grade school looking for books on radio. And there is was – Alfred Morgan’s “The Boys First Book Of Radio and Electronics”. I didn’t know it at the time, but this was the holy grail of electronic books for boys of my age. Many hours were spent building and testing crystal radio sets using coils wound on wooden forms, various detectors and a crystal earpiece.   I could hear radio stations many miles away being picked up by a contraption that I had built with mostly home made parts. I had discovered the magic of radio! That magic still exists with me to this day. 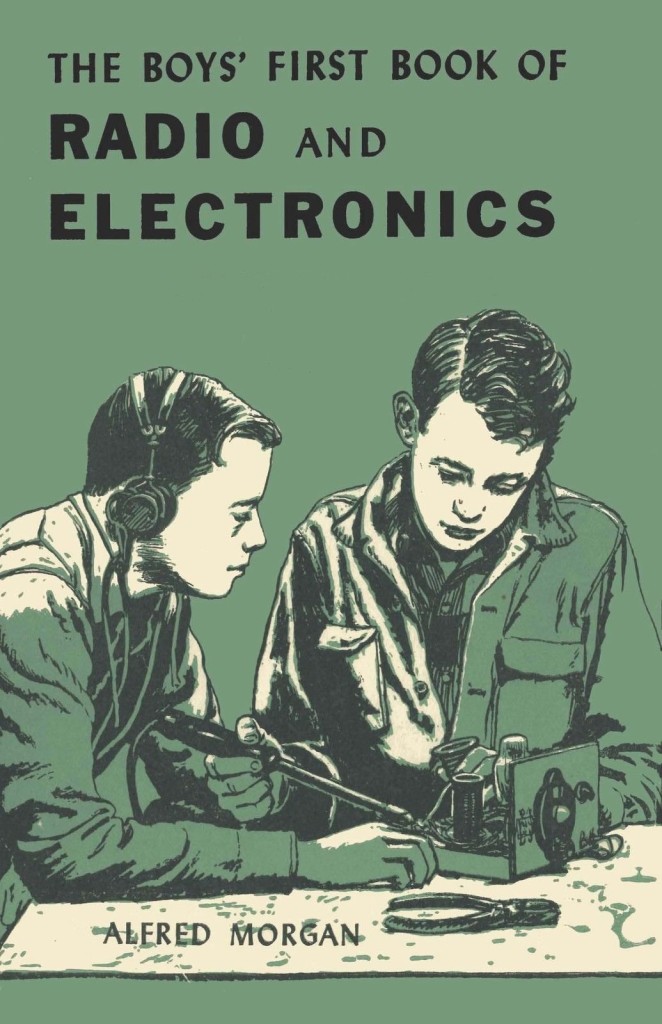 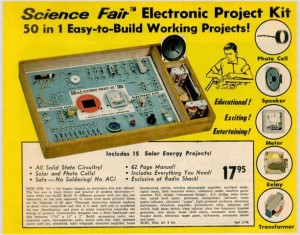 My parents, realizing that I was interested in radio and electronics,  gave me a Science Fair 50-in-1 project kit for Christmas in 1968. This opened up a whole new world that I had not imagined. I worked through all 50 projects in just a few weeks, trying the more interesting ones multiple times. 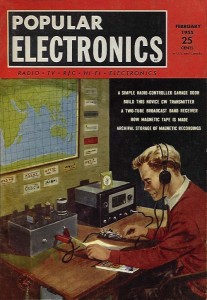 After a while, I became bored with the “canned” projects, and wanted to try other circuits found in books and magazines that my uncle  had given me. This is when I did the unthinkable thing that today I wish I hadn’t done,  I started to disassemble the 50-in-1 project kit. Parts were hard to come by, and it was the only source I had available. The disappointing thing was I don’t remember making anything that actually worked from these parts. Either I didn’t have enough parts, or they were the wrong value.

By this time I had discovered a place called Radio Shack. Another new world of possibilities opened up as I read the radio shack catalog from cover to cover as often as possible. The problem was money. I remember the countless hours of yard work I had done for the neighbors that enabled me to buy that first package of 10 transistors.

In the pack of transistors were a 2N107 and a 2N170. I used these, along with some parts from the 50-in-1 project box, to build an AM radio that would drive a speaker! This was quite a feat for me at the time. A good antenna and ground were required, of course. I build this radio in one of what seemed to be dozens of cigar boxes we had in a closet at home. Dad smoked a lot of cigars. 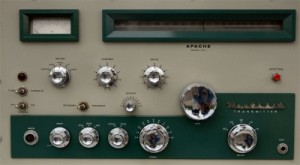 My Dad had a friend that was a Ham. One Saturday, Dad took me to Frank’s house to learn about Ham Radio. Frank (K9YIS) had a basement filled with shelves of parts, projects he was working on and a good collection of radios at his operating position on a desk. I remember Frank turning on a couple of enormous radios (which I later recognized as a Heathkit Mohawk receiver and a Apache transmitter). He moved a lever back and forth on a device that sent dots and dashes (bug key). He then threw some switches, and the strange tones of dots and dashes came out of a speaker. Frank explained that this was Morse code, and that the person on the other end was calling us (Frank had sent CQ).  I was amazed! 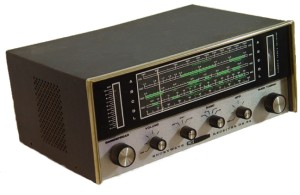 Dad bought a used Heathkit GR-64 receiver for me to use. He made a dipole antenna under the eave of the house using brown screw in insulators, and brought the feed line (300 ohm twin lead) in my bedroom window. We connected it to the receiver and instantly filled the room with Morse code and voice transmissions. I listened to this receiver for many hours, and became more interested as time went by. Who were these people, where were they from and what equipment were they using? Most questions were answered listening to the voice stations, but as for the code stations, I had no Idea. 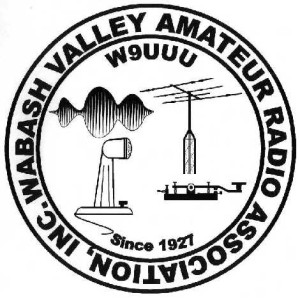 The next step was getting a license. In the winter of 1970, I attended a code and theory class for the Novice license. The class was offered by the Wabash Valley Amateur Radio Association, and was held in Holmstedt Hall at Indiana State University. I picked up the code fairly quickly. The theory was hard for me to understand at the time. I memorized the entire License Manual, even though I didn’t know what some of it meant. I was able to pass the Novice exam and 5 WPM code as a result of this class. I was first licensed as WN9KIX in the summer of 1971 after finishing the 6th grade. 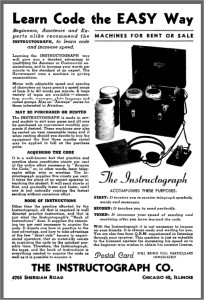 After I got my license, I needed code practice to get my speed up. I didn’t have the confidence needed to make a real contact. Frank (K9YIS) gave me an Instructograph machine with several rolls practice tape. This was a machine of WWII vintage that uses rolls of paper tape with dot and dash size holes in it. As the tape rolls from one spool to the other, mechanical contacts read the holes in the tape and make dots and dashes in an attached headset. The tone produced had a “buzzer” quality. You could vary the WPM of the code using a knob that controlled the motor speed. 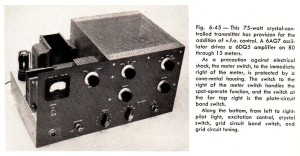 When it came time to set up a station and get on the air, Frank came to the rescue once again. He gave me a transmitter he had built from the 1961 Handbook. It was a crystal controlled 75W Novice transmitter using a 6DQ5. I used the Heathkit GR-64 as a receiver. My first contact was K4UNW, Gerald from Paducah, KY on 80m CW.

I’m sorry to report that my Elmer K9YIS (Frank) and my first contact and friend  K4UNW (Gerald) both became silent keys in 2017.  I feel privileged to have know you. Thanks for all the help and advise you gave to me as a young Ham operator. 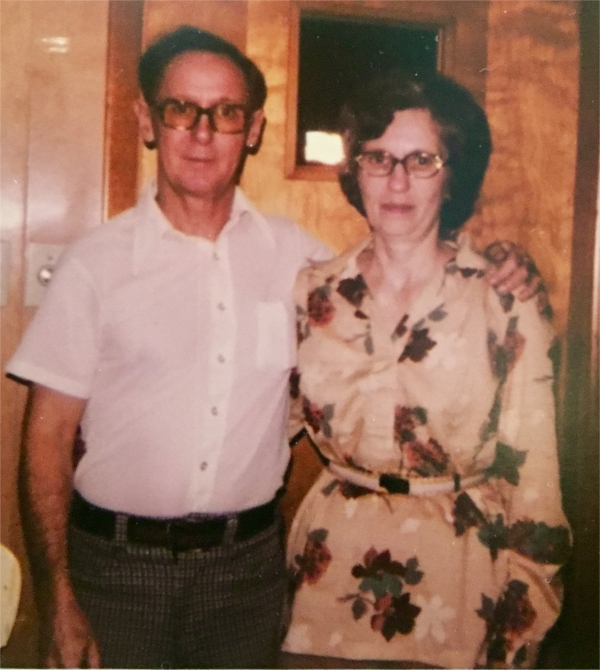 Frank Barkley with his wife Alice 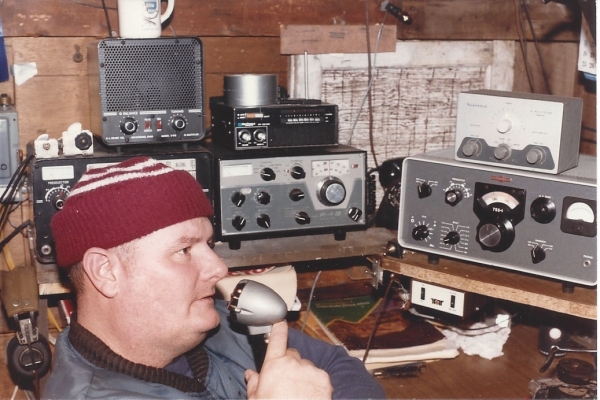