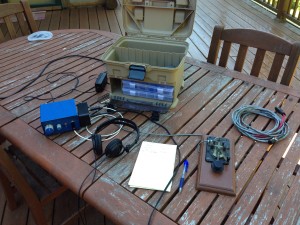 Even though I’ve been a Ham for 44 years, I have not done a lot of portable QRP operations. I have built numerous home brew QRP radios and several QRP kits, but have never taken them to the field. I guess I like to build radios more operating them. My recent QRP operating from the vacation cabin was the first time I’ve set up in the field since the 70’s, when I operated with a Heathkit HW-7.

I’m very familiar with all the problems that can be encountered in QRP field operations, but I didn’t realize how difficult some of them were until I experienced them my self.  Most of these will be obvious to the seasoned veteran of field operations. The bottom line is if you use very simple equipment in the field, you can expect some challenges.

Crystals – I’m a big fan of crystal controlled transmitters. You cant get a more stable, simple circuit than a QRP CW transmitter controlled by a crystal. And in some cases of field operation where extreme conditions exist, crystals would be just the thing for reliable operation. However, for casual field operation, like the picnic table at the cabin, crystals are a pain. Continuously changing crystals and spotting the receiver got old quick. Also, I have a limited number of crystals in the area of 40m I wanted to operate.

VFO Drift –  This is by far the most difficult problem I faced. The home brew radio I used had never really had much testing, other than to see that it transmitted and received. It turns out the VFO for the receiver drifted badly. The initial “warm up” drift was about 1 kHz over the course of 20 minutes. After that, the VFO drifted above and below the desired frequency at will. There was also a noticeable drift change due to temperature during transition from morning to midday.

Straight Key – I use the same key I’ve had since the novice days. Its a great old J-38 from the US Navy. However, I would have loved to had a keyer, or better yet, a keyer with memories. I found that with crystal controlled transmitter operation, answering other people’s CQ was not effective. And for some reason calling CQ myself wasn’t very effective. What worked surprising well was calling CQ QRP. And when I say it worked well, I mean someone answered my CQ QRP about one out of eight times verses one out of 15 times for a regular CQ. No matter how you look at it, that’s a lot of code to send with a straight key. Furthermore, conditions were perfect for using a straight key, I had a comfortable chair and picnic table. I cant imagine a long operating session with a straight key at a camp site.

Direct Conversion Receivers – They are easy to build, and have good sensitivity, but have several problems. First of all is dual signal. Hearing stations above and below the operating frequency can prove challenging, especially in a crowded band. Then there is audio bandwidth. In the simple rig I used recently, there was no audio filtering. Addition of a simple one or two stage audio filter to limit the bandwidth during CW operation can make a world of difference. Of course VFO drift would come into play if an audio filter was used. A stable VFO is a must.